Occupational safety and digital Security training for journalists in Ma’reb

Studies and Economic Media Center has concluded the occupational safety and digital security workshop for 24 male and female journalists in Ma’reb governorate.

The four-day workshop was aimed at enabling male and female journalists to assess their field and digital risks and to acquire the skills to deal with and avoid those risks.

Zine El Abidine Ben Ali, a participant, said that the workshop gave them the skills to measure and analyze risks, how to develop field coverage plans in a safe manner, and identify protections and safety tools that help them avoid risks.

Ben Ali added: “The workshop has also enabled us to learn about digital safety technologies, and earned us the skills of using data protection and privacy security tools”. 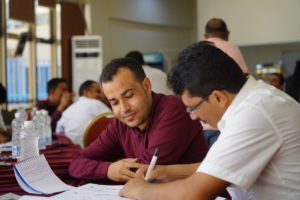 In addition; The Executive Director of Studies and Economic Media Center said that the workshop was part of a series of training workshops carried out by the Centre in partnership with the Ministry of Foreign Affairs of the Netherlands to meet the needs of journalism, especially in view of the increasing cases of physical and digital violations of journalists and media workers.

Also, Ismail added that providing journalists and media workers with information and physical and digital protection tools is a priority for us, enhancing the opportunities to protect journalists and thereby ensuring that they play their role in the transmission of information.

Journalist Wala’a Dinesh, a participant, said that the workshop was unique and at a time when we were desperate journalists, we learned from it skills and applications that we did not know before, as well as we learned about practices that we believed were sound until this workshop revealed our mistake.

She added: “I can say that we learned how to plan for any field work and how to transmit data in a safe way, and how to safely archive it, other tools and skills”.

Studies and Economic Media Center is a civil society organization that works for professional media and implements several programs aimed at developing media in Yemen.

The fifth journalist who killed by explosive charges in Aden…. Freedom media observatory is condemning the crime which has targeted Saber Alhaidari

Marsadak condemns the campaign of incitement against photographer Hamza